What’s so interesting about Wildlife?

Since finishing my work at the end of January, I have discovered a passion for an area of photography that I’d only really dabbled in previously, Wildlife.  I’m not really sure why my previous experiences with this genre didn’t leave me hooked, but I do know that I always viewed the results with a certain disinterest afterwards.  It wasn’t that they were poor shots, or that I wasn’t interested in the subject at all, it was just that in my mind, one photograph of a particular bird was very much the same as another.  So, what changed?

The first change was the amount of time I now had.  It took a few months to get used to not having a 9 to 5 job anymore and I spend most of that time going for long walks and spending time in my local park.  When I didn’t have to rush to any meetings or the dreaded ‘Teams calls’, I found myself just looking at nature, which I know sounds a little cliché but it’s true, I genuinely hadn’t really just watched.   I started to notice the variety of wildlife that visited the park, from ducks to squirrels, herons to the illusive kingfisher.  Each appeared to have a set of behaviours that fitted a loose routine.  The heron would normally appear in the afternoon, the ducks would roost on dry land and move to the pond in the morning etc.   This was the first thing that piqued my interest in wildlife photography - the behaviours and patterns of the different species, which could be observed easily enough if one puts in the time.  I started to learn things too, the first being how violent and potentially fatal the mating ritual of mallard ducks is.  I watched in horror as the drake almost drowned the female, only to be chased off by her when it was all over.   The drama of the ritual and how to represent it in a photograph became the challenge which put my previous experiences with wildlife photography into context.  There is a ‘creativity’ in telling a story of an animal’s behaviour which is, in my opinion, far more interesting than simply capturing its perceived ‘beauty’. 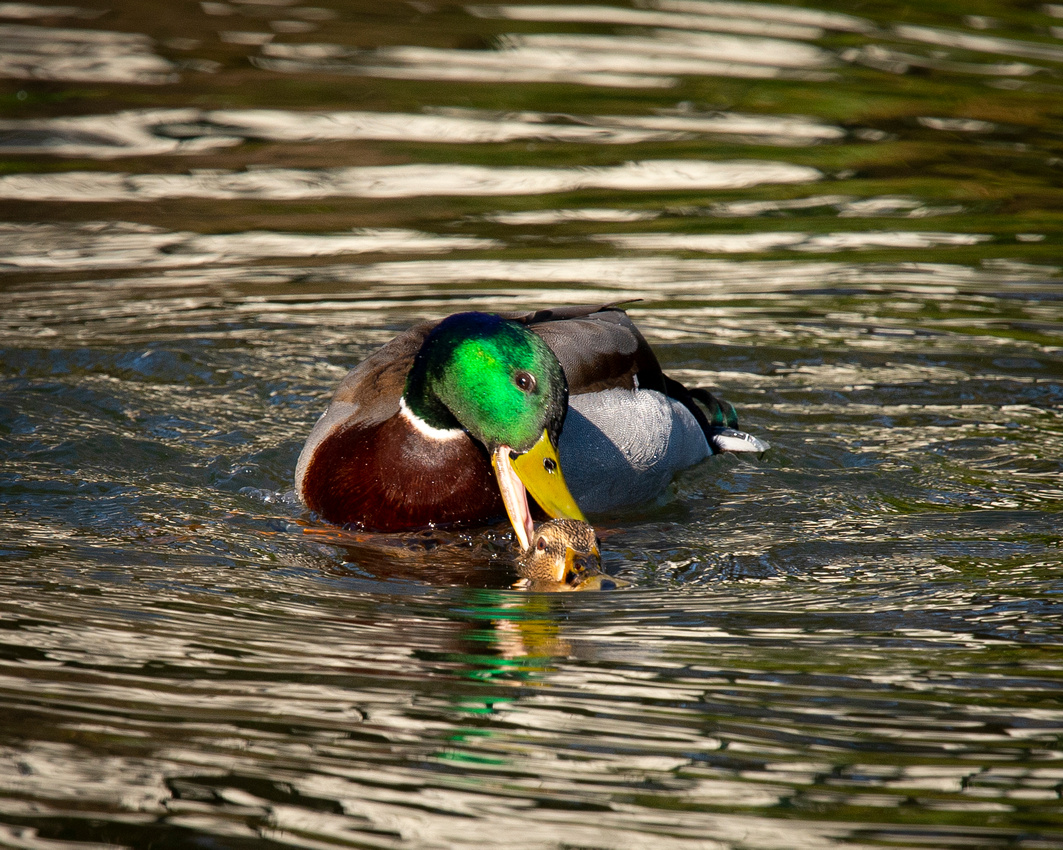 Continuing the duck theme, the next thing I learned was that they fish.  I had gone 48 years without ever having known or seen a duck fishing, so it was quite a surprise to experience it for the first time.  I was watching a group of ducks diving completely under the surface of the water, which isn’t really news to be honest as I’ve seen them do this many times before.  However, I then saw a female leap onto the bank with a small fish in her mouth, which I quickly learned was a tactic to stop said fish from escaping her grasp in the water.  The problem was that she was then spotted by a nearby group of drakes, looking like a gang from West Side Story.  They decided that they were going to steal the fish and started to walk menacingly toward her.  For some reason, I decided that I wouldn’t let them take it from her, so positioned myself between them and their target.   Once the danger had passed, she was relaxed enough for me to take this shot of her and her catch. 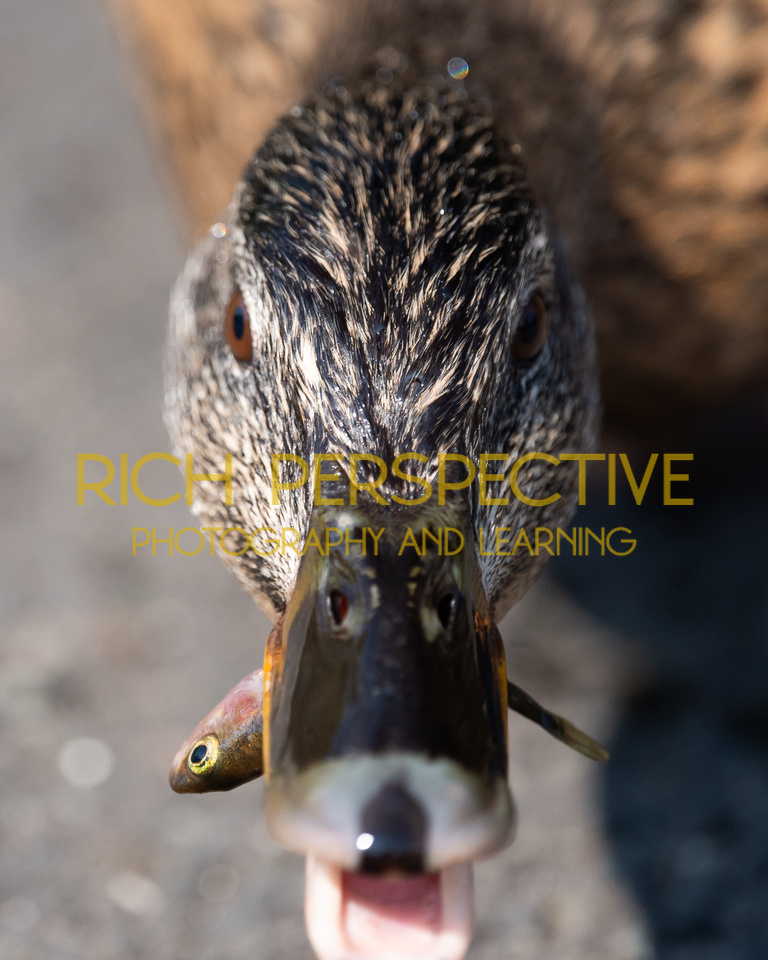 I’d now observed a behaviour that I kept seeing repeatedly over the next few weeks.  Then it dawned on me that the females were far better fishers than the males because they needed the nutrition to help produce their eggs.  As I continued to watch them, I noticed the fishing decline once the broods had hatched.   From a photographic perspective I was beginning to see the point of shooting wildlife as it opened up a whole new world that we just don’t see because we are busy rushing from one place to another.

My new-found passion for wildlife photography has also taught me how to get the most out of my camera and selected lens.  I was asked recently what settings I generally use, and I couldn’t really answer.  My workflow with the camera has evolved for my equipment and the conditions that I am shooting under, so it’ll vary from someone else’s experience or objective.  Wildlife photography has come at a cost too, with the recent purchase of a longer telephoto lens so that I can increase my distance from the subject.  I’m looking forward to getting out there to shoot with it.

For me, the learnings from this experience so far are to take time to look closely at something we might not immediately see any interest in.  Slowing things down helps us to appreciate what our busy lives prevent us from noticing.  This applies to all aspects of our lives, but in terms of my photography, only when I stopped and looked did this make sense.

You can see more of my wildlife photographs at www.richperspective.co.uk in the album 'Wildlife'  If you’d like to know more or are thinking of taking up photography for the first time, please drop me a line about some beginner’s tuition.