End of the Aerochrome Road

In my previous post I described the humbling experience of shooting my first roll of Kodak Aerochrome colour slide film and getting what can only be described as awful results.  In the analysis that followed, I concluded that I wasn’t entirely sure what had caused the shots to look so bad, but resolved to have another go with my remaining two rolls of film.  In the back of my mind, I thought that perhaps the time of year was a factor, having shot the first roll on the first sunny day we’d had in the spring this year.  Perhaps the film really needed mid-summer light in order to respond with that beautiful colour shift that Aerochrome was famous for.

As the country headed into a heatwave and I had a holiday in the Yorkshire Dales coming up, this seemed to be the ideal opportunity to have another go.  Once again, I used my Nikon F6, which has one of the best meters of any film SLR, and that I had shot many rolls through without any exposure issues.  I loaded the film in the dark, fitted the filter to my lens as instructed and headed out.  Perceived wisdom, otherwise known as the internet, suggested that as the film had expired over a decade ago, I should overexpose by anywhere between 1/3 and 1 stop to counteract its age.  As the film had been frozen since it was discovered by the FPP way back when, I was pretty confident that there weren’t any other mishandling issues that could contribute to the condition of the emulsion.  Slide film is notoriously intolerant to overexposing, so I would need to ‘bracket’ the shots.  This means taking a number of pictures of the same composition and varying their exposures to see which one works best.  It’s a costly but useful thing to do in film, however bracketing is still used in digital photography today because there is no impact in doing so.  Ansel Adams once said that if you need to bracket, you don’t know what you are doing – we’ll just leave that thought alone for now.

Conscious that I was suspicious of the lab that I used last time, I did some research and found one who specialised in developing IR film.   Feeling really confident, I went out to shoot the beautiful Dales countryside.  When I got the film back from the developers, I was distraught.  Despite my best efforts, the film was totally ruined with a every shot saturated with a purple hue and all the contrast lost. 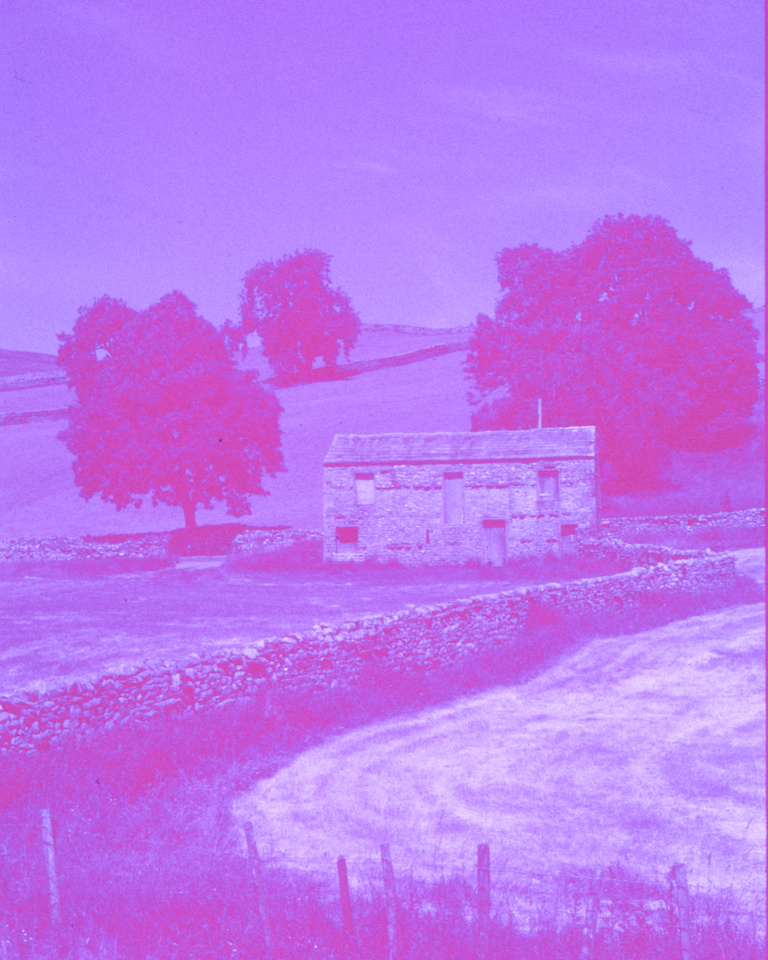 I was at a complete loss as to what had happened this time.  Some more research online revealed that others had suffered the same problems despite doing everything possible to shoot and develop according to the manufacturer’s instructions.  In my case, the bracketing made no difference at all, which led me to ultimately conclude that it was an issue with the film.  Something had affected its behaviour in a way that I couldn’t comprehend.  All I knew was that the issue was consistent with both rolls which, given they were hand-rolled from a bulk reel, isn’t a surprise.  To be clear, I’m not making a point about the previous owner or supplier, just that this was my experience.

I guess my learning from this experience was swift.  I have no rolls of Aerochrome left and it is now incredibly rare and expensive to get hold of.  Even if it could be sourced the same risks associated with expired film, such as storage and handling, still exist.  What this means is that whatever the reason for the poor results, my time with this film stock is done.  Yes, it personally cost me a lot of money, but I don’t regret tying it.  Film can be a cruel mistress with its lack of immediate feedback, the potential waste of actual money and errors creeping into the end-to-end process.  That is why ‘digital’ took over and remains the dominant technology.  For those who want the reward of the beautifully natural look of how film renders an image, we must accept that risk.  I was certainly angry and disappointed, but it was worth giving it a go simply because of the mystique surrounding Aerochrome.  The reward didn’t come, but I can’t dwell on that – time to move on to the next project.  When I think about this, it’s pretty much the same for anything in life where if our best isn’t quite good enough, there isn’t much to be done but move on.   In my case, I’m going to stick to the paths trodden by Kodak and Ilford from now on.