A couple of years ago I had a momentary loss of my faculties and bought 3 rolls of what is probably the most rare and mysterious film stock out there.  Kodak Aerochrome is a colour infrared (IR) film that was originally designed for military use in locating man-made objects hiding in vegetation.  The film renders organic materials that naturally reflect light in the IR spectrum as varying degrees of bold, mainly red colour where artificial materials generally look similar to how they do in visible light.   In short, any plant or tree life looks like something out of a science fiction movie, while man-made stuff like artillery and camouflaging don’t.  The film found other uses in airborne survey of vegetation after the military need diminished, but eventually Kodak called time on the film in around 2010.  Since then, photographers and film-makers have used the remaining stock to create beautiful, other-world artworks.  As the film became rarer, the laws of supply and demand drove up the price to an eye-watering $40 per roll (back when I bought mine).  I grabbed my 3 rolls and put them in the deep freeze until I could find a subject.  Then came the pandemic and my priorities changed.  The film is ideally shot during the summer when the intensity of the infrared in the sunlight is at its highest.  Once the summer of 2020 had passed, I resolved to shoot it in 2021.  As the film was in the deep-freeze, it wouldn’t dramatically age during that year…unlike me.

Once the impact of the pandemic began to ease towards the end March 2021, I thought I would have a go at shooting one of the rolls during a brief period of bright, sunny weather.  I selected my Nikon F6 to shoot it in, having first checked that it would work.  Lots of film SLRs used light emitting diodes (LEDs) to determine how far the film was being advanced with each frame shot and this is a big problem with IR film.  These lights emit sufficient light in the IR band to fog the film before we even start.  The F6, being a professional SLR didn’t suffer from this problem and it had the additional benefit of having a very accurate light meter.  I thought this combination would be a winner.  After loading the film in the dark…yes, even loading in normal light can fog the film inside the cartridge, I was ready to shoot.   I went to the local park to find some compositions that would include vegetation and man-made structures to really bring out the legendary look of the film.  Once done, it was just a case of waiting for the lab to develop them.  When it comes to processing, the film is a positive slide which needs to be done as E6 process.  Anyone who grew up in the 1970s will remember sitting around a big screen looking at slides of someone’s holiday photos.  Tedious slide marathons aside, in my opinion there is no more magical a film than a positive slide.  Anyway, the IR film can’t just be put in a processing machine for similar ‘LEDs-ruining-everything’ reasons as mention previously.  My lab uses a manual process that was established as safe for colour IR.   With all of these elements in place, I was confident.  How wrong could I have been?

When the film came back, the clearest issue was that they were all under-exposed. The film is expired and although it had been tested, I didn’t take the age of the film into account.  There is a school of thought that says that if you’re using expired film, you need to over-expose by 1 stop for every 10 years by its expiry date for negative film.  Wasn’t sure this also applied to positives.  Perhaps I was instinctively worried that if I deliberately over-exposed to compensate, I would then run into the well-known narrow dynamic range associated with positive slide films - slides are notoriously stingy when it comes to exposure and demand to be spot on to get good results. Whatever the reason, there is nothing worse in film photography than under-exposed slide film and that is what I had. 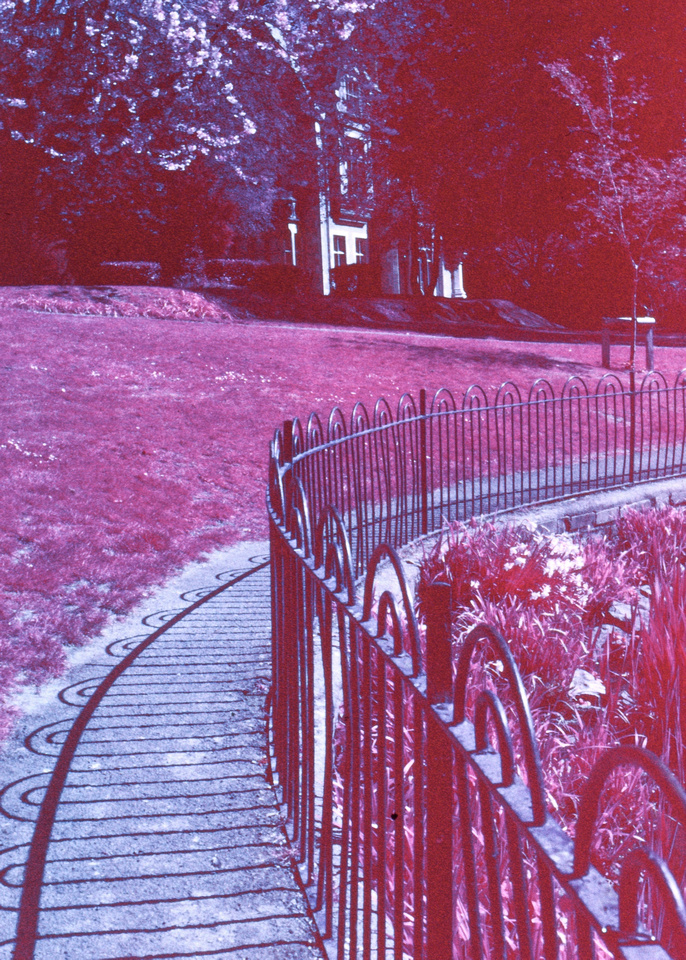 When I look at these shots, I can see the desired infrared effect.  However, the shadows are a mess.  I used matrix metering on the camera to get the average meter reading based on the dynamic range of the scene.  The loss of shadow detail and the weird grain that appears points to the exposure being well off.  Like all film fails, it’s hard not to ask other questions.  Was the film any good to begin with? Did the camera work properly? Did the lab screw up the processing?  I started to think about these other possibilities.

Taking them in turn, the film came from the brilliant Film Photography Project in the U.S. and they in turn got it from a vault in a military facility.  It had been stored properly by both parties and the FPP did their own testing on the batch before they hand-roll it.  I find it hard to blame the film knowing how it was handled all the way from the various freezers to my camera. As for the camera, my F6 is only a few years old and has worked perfectly with every other roll I’ve shot through it - so I guess that’s not it either.  That leaves the lab, which is an easy target and people often pin their photographic failings on the poor technician who processed the film.  I can’t find any variations between the frames on the film and the image structure is present in each.  No matter how I look at it, this was my issue and not theirs.   One thing I’ve learned about film photography is that it pays to be humble about one’s own shortcomings when things go wrong rather than try to blame something else.  Sometimes, you just get it wrong and the consequences as well as costs are yours alone.

What I’ve learned about this first roll and this experience is that trying something different and being prepared to get it wrong is a positive thing.  I had to look past the cost of the roll, admittedly through my tears, and see what I would do differently next time.  More research into shooting expired slide film and even waiting until the proper summertime conditions would be top of the list.  I would also think about developing it myself if I can get some E6 practice before then.  What I know for sure is that I can’t wait to have another go. With a holiday coming up, perhaps the stars will align next time.