Thinking in Black and White

Has anyone ever said to you “You’re so black and white”, meaning that you are extremes with no in-betweens?  If they have, you’ll be relieved to know that this post is nothing to do with that.  It is in fact about one of my photographic pet hates, the act of randomly converting digital images into black and white.   It’s nothing new or course, but I see it more and more on social media platforms where the photographer has added a ‘filter’ to their upload with little regard for what’s in the frame.  The other common occurrence is when a photographer isn’t happy with the impact of the picture (impact is one of those nonsense words used to describe photographs – see my last post about elements and meanings) and tries to make it more interesting by converting it.  Thing is, taking either approach doesn’t necessarily do anything for the image, in fact for me it often makes the result less interesting.  The problem as I see it is not thinking in black and white.

Unlike my opening question, black and white photography is far from just extreme black and extreme white. There are many more grey tones between them that the human eye can discriminate and while there is a great deal of research and debate about how many we can resolve, it’s accepted that it could be as many as 900.  The grey tones we see in a black and white photograph are dependent on the amount of light reflected from the subject as well as the colour (wavelength) of that light.   In the early days of photography, photo-sensitive materials such as film were responsive to only certain colours in the scene.  These orthochromatic films were generally sensitive to the blue region of the spectrum, while attenuating everything in the red region, playing havoc with outdoor scenes where the blue sky appeared overexposed (very light grey), and the actors underexposed (very dark grey).  Early filmmakers had to experiment with set design, costumes and even make-up to ensure that when the film was exposed, everything appeared as the cinematographer intended.  In those days, watching a movie being produced would have been a strange experience with the exaggerated white makeup and bright paint used to lift some surfaces.   As technology advanced, panchromatic films were developed that were sensitive to much more of the visible spectrum which meant a more balanced response to light, but with many shades of colours now looking similar when represented by the film’s greyscale.  The look of a movie could further be controlled by fitting colour filters to the lenses (more on that later), but the key thing that had to be considered was ‘what would this scene look like in black and white?’  Hence the idea of specifically thinking this way.   For example, imagine you saw a woodland scene where the light was dull or flat and the greens had a pleasant but subtle variation to them.  You take that picture in colour and look at the result.  The image will represent what you saw and your brain discriminate between the subtle changes in colour.  If that picture is turned into black and white, those variations become less clear because essentially the scene is green and being represented by relatively few grey tones.  Now, if the sun comes out and lights the trees e.g streaming through the canopy onto the ground, then that image would look different as a black and white photograph.  The difference is the introduction of more highlight and shadow, in which the subjects are more vividly presented as contrast.  Now the intensity of the reflected light is uppermost in our minds and the colours of the trees less important.   Thinking in black and white then is more a consideration of contrast and tone rather than colour and what appears to work in one doesn’t necessarily work in the other.

Ansel Adams, perhaps the greatest ever technical photographer, used to hold up a Wratten 99 filter to his eye when viewing a scene.  The filter effectively reduces the image to its tones, flattening the colours momentarily while the brain attempts to compensate.  For a brief moment though, Adams could see what the scene would look like in terms of black and white tones in order to set up his shot.  Once he’d done that, he could consider if he wanted to use a colour filter on his lens to enhance particular areas of the picture based on the colour of the light being reflected.  Colour filters, pieces of glass or plastic fitted to the end of the lens, effectively control the light hitting the film or sensor by only passing colours in the spectral region around its colour.  For example, red filters pass light in the regions of the red/orange/yellow spectrum, while green pass regions of green/blue/violet.  The impact of a filter when the image is black and white is how the colours are represented as grey tones, namely the passed regions look lighter in the image, while the attenuated regions (the ‘complementary colours’ on the colour wheel – see link below) look darker.   Another effect of changing the way the tones are represented is on the contrast with some filters, such as red and orange increasing it considerably.  Take the example below. 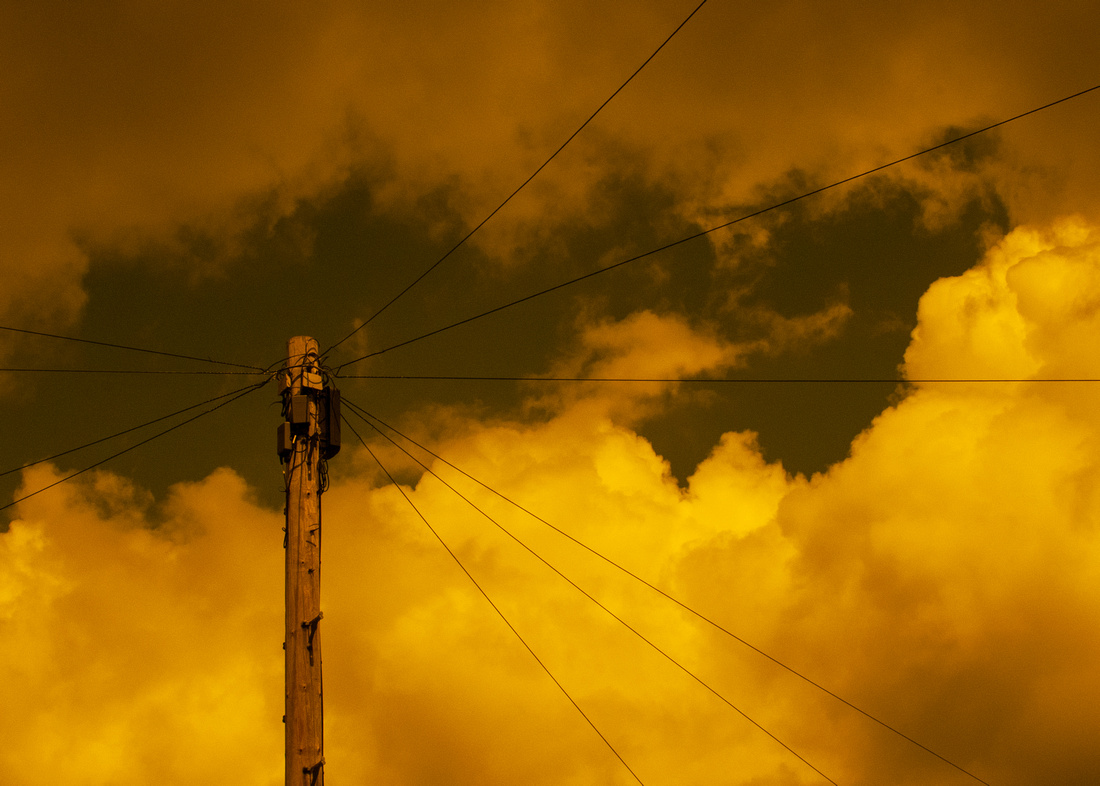 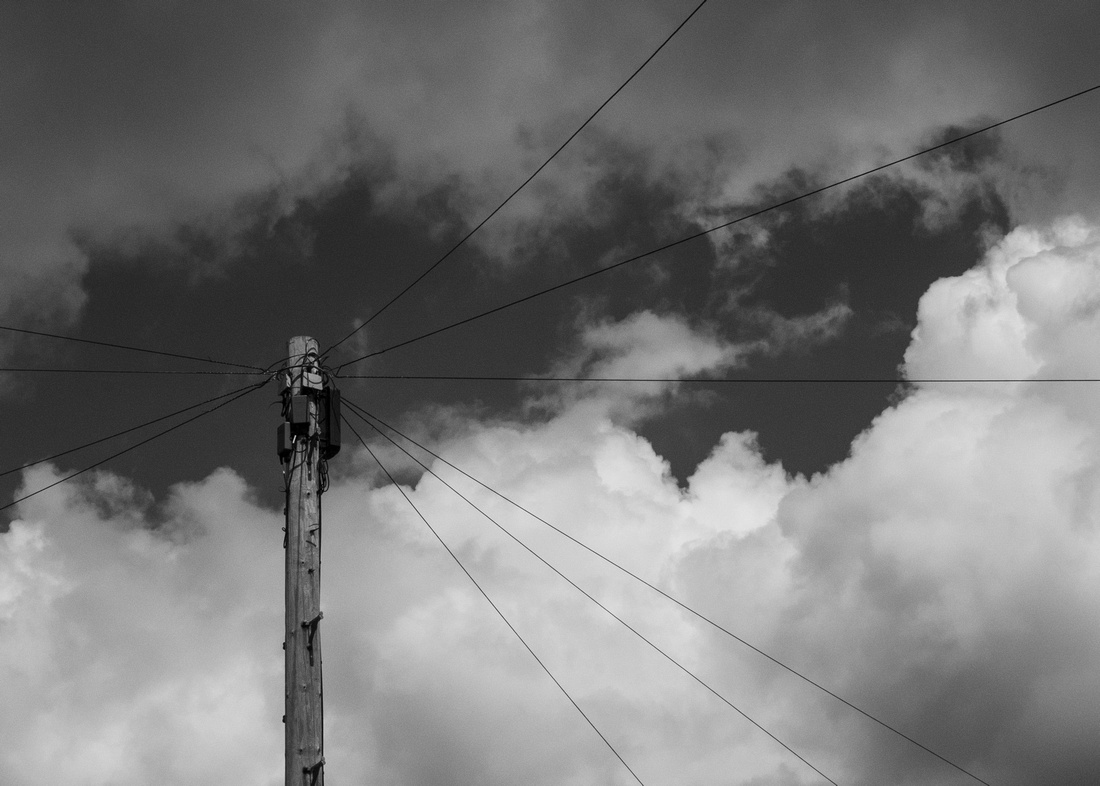 The first  colour image is a simple scene which is contains areas of blue sky and clouds, the latter, along with the telegraph pole, being highlighted by sun.   However, the lens is fitted with an orange filter, which in addition to making everything look orange (don’t forget it only passes that colour), has attenuated the blue sky while passing the light reflected from the other elements.  The second image is a conversion, without adjustments, to black and white and shows the darkened blue sky and elevated highlights from the subjects reflecting the most orange light.  The overall effect is a high contrast scene with deliberate emphasis on the highlighted areas.  These effects can be further enhanced in post-production, something that is present in all of Adams’ famous images.  He viewed the finished print as the culmination of work both in camera and in the darkroom.

"…in the sense that the negative is like the composer’s score. Then, using that musical analogy, the print is the performance". – Ansel Adams

There are some great modern digital processing plug-ins that replicate the effects of lens filters, but for me they don’t replace the need to pre-visualise the shot before pressing the shutter button.  Taking our time to look at how the subject is lit, thinking about how to bring out the best in the composition when converted, then employing some techniques in-camera, really helps our understanding of image making.  So next time you’re hovering over that ‘just do it’ button, ask yourself whether it make the picture look any better.  With a little pre-visualisation beforehand, it just might.

For more information about colours and complementary colours:

Fancy learning more about filters and the way they affect photographs?  There is an introduction to their use in my core modules for beginners.  The core modules give you everything you need to get started in this wonderful hobby.  Find out more by dropping me a line at [email protected].