Advanced Photo System – The Last Roll of the Dice

I was recently helping a friend sort out her late father’s extensive camera collection so that it could be sold.  Like many keen photographers (including yours truly), the acquisition of new gear is something that goes hand in hand with discovering a new area or genre of interest.  For example, my recent interest in wildlife photography led to the purchase of a super-telephoto lens, which means that I now frequently go looking for opportunities to shoot wildlife and make the most of my investment.  The collection that we were sorting out was comprised of many modern cameras and lenses but in amongst them were a few ‘specials’.  Of these was a peculiar compact camera from the 1990s called the Fujifilm Fotonex 3500ix Zoom.  In fact, the first thing that struck me wasn’t related to the camera itself, but the fact that manufacturers had a lack of imagination when it came to naming cameras for some reason.  The same is true today; more Z7 than ‘Super Ikonta’.  However, my interest in this unusual little camera was wider than that. It took APS film. 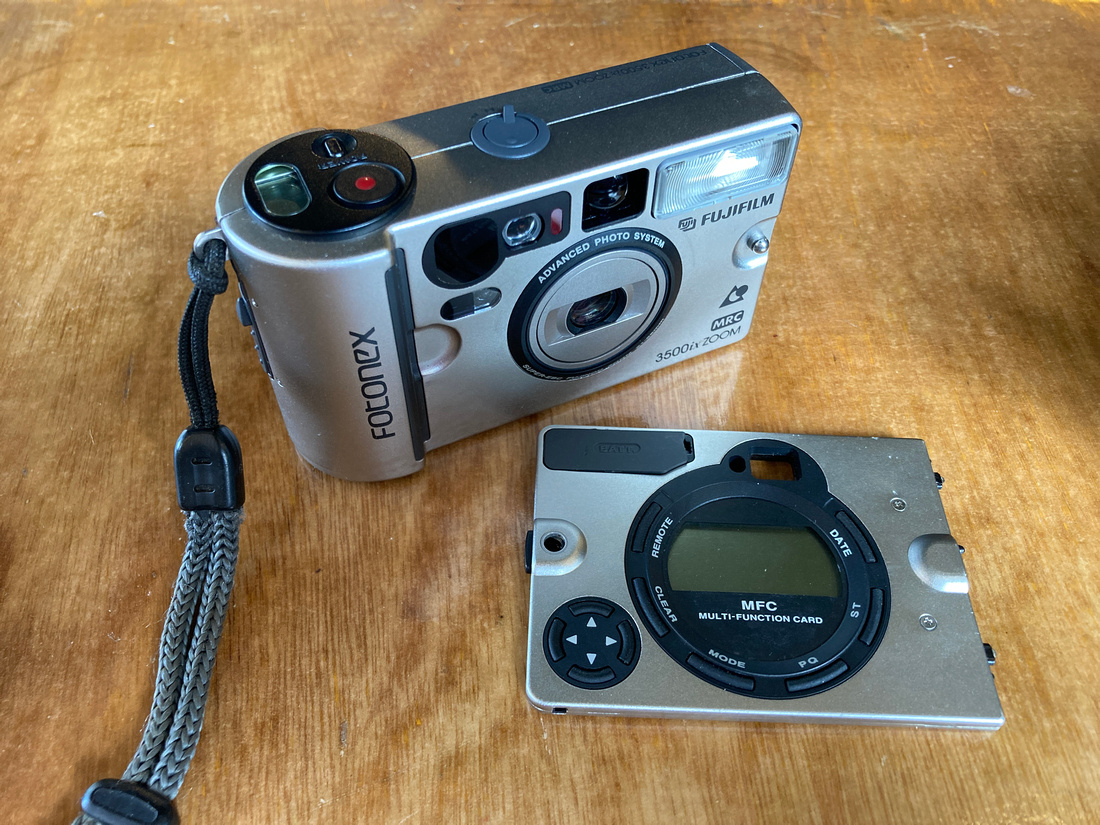 The compact Fotonex APS camera by Fuji. Shown here with it's clever remote control unit that doubles as a lens cap

APS, or Advanced Photo System to give it its proper handle, was a system conceived by the major film and camera manufacturers in the 1990s.  At this time Kodak still had its stuck in the ground about the emerging digital camera technology, but like the other film and camera manufacturers they were clear that in order to strengthen their position and keep film photography fresh, something new and exciting was needed.  Kodak had been burned in the 1980s by the awful Disc format, for which they used the laughable tagline “Picture a Brand New World” (check out the link to the Kodak advert on Youtube below).  It was short-lived when people realised that their old compact 110 format cameras shot better photographs, despite the disc cameras being technologically advanced.  After this disaster, Kodak went back to 135 which is what we know and love as 35mm.  The collaboration with the other major manufacturers had to work, and it actually did. The APS format was the result.

APS used a new self-loading cartridge system which simplified the user experience from 35mm.  It also served as the home for the unexposed film when new and the exposed negatives once developed.  The idea was that the photographer would shoot the roll and the lab would send the film back in its cartridge along with prints made from the negatives.  If they subsequently wanted other prints, they could take the cartridge to any film developer who had an APS processor, and the film would tell the machine which prints to make.  More interesting was that the photographer could also shoot different formats one one roll and the film would record this information too.  The frame on the negative would be full size but when the photographer wanted to print a different, the machine would read what the camera was set to at the time and make the print accordingly.  Another benefit was that the film recorded partially shot film, which meant in the higher end cameras, that a cannister could be wound back in mid-roll, replaced for different conditions (light etc) and then reinserted for the rest of the roll to be shot.  The whole shooting experience was simplified for the photographer while simultaneously demonstrating a significant advance in the equipment.  Cameras had to be smarter and the processing machines were also different from traditional 135.  The processing machines locked the developing houses into the technology, which was fairly common with film manufacturers of the day.  All in all, it looked like a great idea.  However, the digital age was dawning and as cameras improved in image quality and the price came down, APS and film in general started to become obsolete.