The Importance of Method

When I was a kid, one of my favourite subjects at school was physics.  There was something about the need to be able to explain the tiniest physical actions, cause and effect, transfer of energy etc that appealed to me.  More importantly, we had the chance to try things out to test a theory or demonstrate learning.  Thing is, the experiments weren’t just random ‘playtime’, they had a system or method to them.  This shouldn’t come as a surprise to anyone, but what might do is the realisation that in photographic art, the same is true.

I’m not talking about the technical here, but instead exploring a creative idea within some form of structure.

I first learned this lesson in 2020 when I had a university assignment to complete which was about ‘photographing the unseen’.  I essentially had to create narratives using contextual elements rather than including the actual subject of the story.  My idea was to include pictures and text to describe the random, often bizarre thoughts that people have immediately after they suffer a trauma of some kind.  I’d asked friends and family to contribute the thoughts as they remembered them, but planned to leave out their descriptions of the trauma itself in order to let the viewer make up their own mind.  Emboldened with my idea, I went out looking for subjects and scenes to shoot and that was when the trouble started.  Wandering around with a camera looking for inspiration is, it turns out, very stressful.  The more you try to will a picture into existence, the harder and more frustrating it gets.  This also has the effect of making you lose concentration when it comes to looking at a scene, which is kind of important in photography.  When a close deadline was added to the mix, it all got a bit messy.  With perseverance, I eventually managed to create the series and discussed my problems with my tutor.  She pointed out that having a plan, far from being restrictive to the creative process, actually helps take care of the practical logistics.  If you can plan these, there is less pressure on the creative phase of making the work.  She told me of a wonderful series called Geolocation (2007)[1], where artists Nate Larson and Marni Shindelman took a number of very emotional tweets from Twitter and made a note of their geotag data, i.e. the location where they were posted.  They then visited the locations and made a photograph for each tweet.  Combining the tweets with their images tells compelling, albeit fictional stories about the people who posted them (who remained anonymous) which are driven by the what the viewer brings to them. 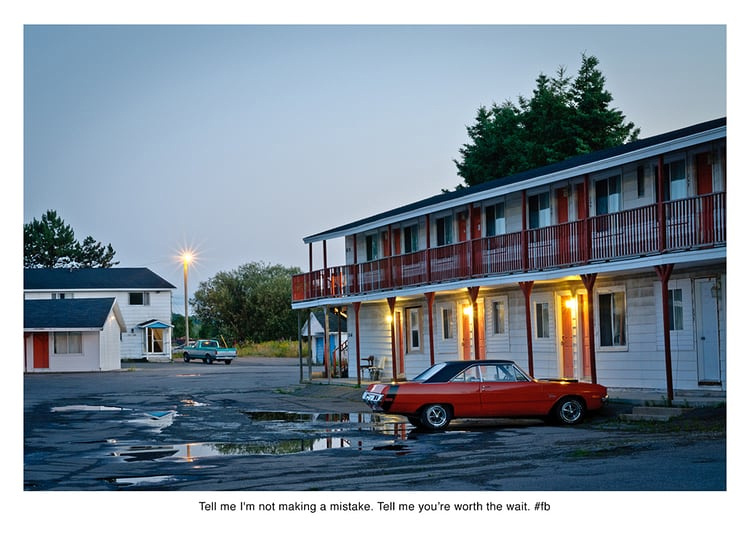 From Geolocation by Nate Larson and Marni Shindelman[1]

The point my tutor made was reflected in this series as the artists had the ‘where’ nailed down – something at that location would make the picture.  They could still be creative, but the structure meant that they spent more time thinking about what they wanted to say.

This idea of having some form of plan has stayed with me in every constructed tableau or documentary image I’ve shot since, and was just as important when making my latest work for my course.  The objective was to re-create a famous image using the conventions of the genre it belonged to.  I chose a portrait image from legendary photographer Elliott Erwitt’s book Dogs, which is one of my favourites. 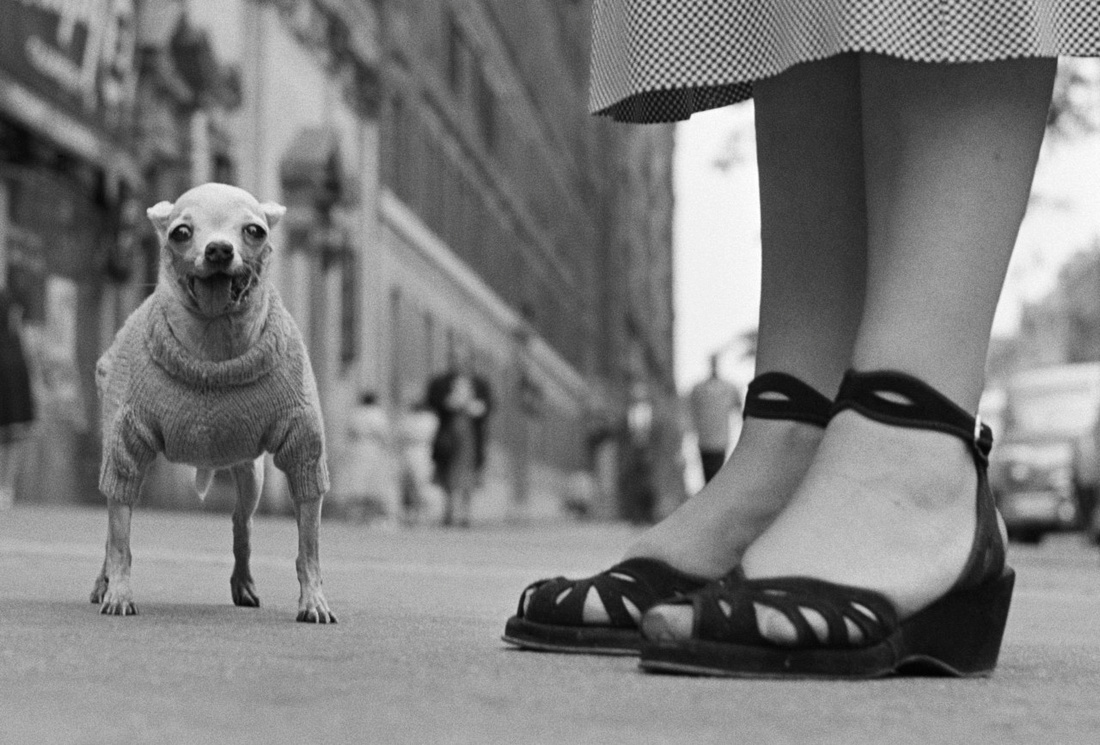 If ever I needed a plan, now was it.  Working with a very excitable chihuahua on a busy street?  Once I’d planned out in advance the location, angle and the props (my wife’s shoes), it was simply a matter of getting the model to stay still.  He was great, giving me a whole range of expressions and reactions to hearing his name etc.  Taking out the practical considerations to begin with kept my blood pressure down as I tried to get his best side.   We all want to make our lives easier, right? 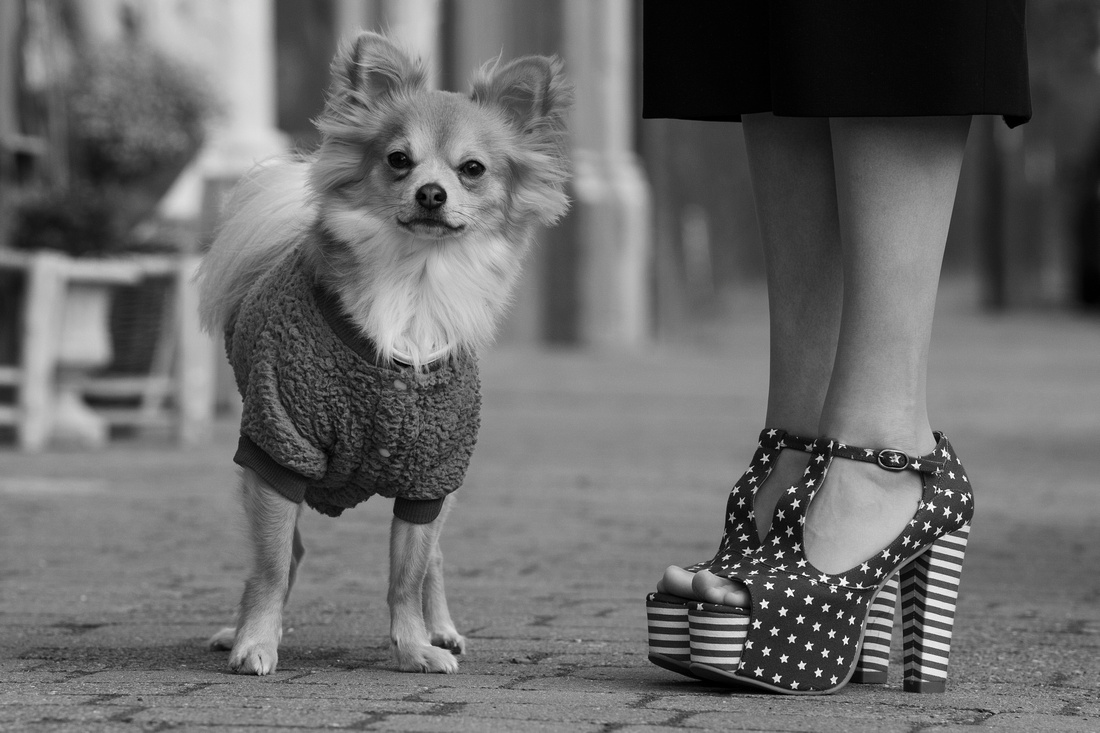 After Elliott Erwitt (2022), by Richard Fletcher

Interested in taking up photography or just starting out with your camera?  Why not have some beginners’ tuition?  I offer a structured series of one-to-one sessions aimed at getting you off Auto mode and taking better pictures.  For more details, drop me a line at [email protected] or visit www.richperspective.co.uk.

Alan Jones(non-registered)
Great article Rich, any kind of extemporisation requires some kind of structure or plan, because then, as soon as you get an idea, you have a theme to build it around.
No comments posted.
Loading...
Subscribe
RSS
Recent Posts
As you ‘like’ it The Rise of Face Value I procrastinate; therefore I am (maybe) The Importance of Method The Comfort Zone Advanced Photo System – The Last Roll of the Dice Reciprocity Failure and the Silver Lining “Make it more complex”, said nobody ever To Imagine or To Know Forget the gear, have an idea
Keywords
photography creativity tuition film artist simplicity Dogs Erwitt narrative plan
Archive
January February March April May June July August September October November December
© All Images are the copyright of Richard Fletcher
User Agreement
Cancel
Continue